Following from the earlier update the Club is very pleased to advise members that a number of additional powered sites have been secured in a nearby caravan park for the Charters Towers Chairman’s Muster.

Once powered sites are exhausted at the show grounds members, upon booking, will be contacted to advise that they will be in the overflow area. Members can then elect to then have the following options-

Members will still need to book through the ACC website.  Just sign-in and click the link to the Chairman's Muster that will appear on the right.

The overflow area will also be a powered site at $24 per night.

It also great to announce that Cabins are also available at a 15% discount - though no further discounts apply. If members are interested in Cabins, please contact the Muster coordinators.

Thank you for all the bookings and enquiries to date and we look forward to welcoming you to the Muster.

PLANNING ON REGISTERING FOR THE CHARTERS TOWERS CHAIRMANS MUSTER?

A check of the venue is planned at the end of the month, to determine if additional powered sites can be released.

Whatever the outcome, there will still be plenty of unpowered sites available.

This means that registrations from today have the following options

Additional local powered options if available are being investigated and further updates will be provided as and when available.

TRUCK STOPS ARE IN THE NEWS AGAIN

It can be very frustrating for long distance truck drivers who must by law stop at regular intervals to rest when they are not able to find a place to park their large rigs or find them filled with other road users who often have far more alternative places to park.
The different levels of Government and many roadhouses have placed large rest / park bays to accommodate the large B-Doubles who have very limited turning ability and need long bays to accommodate their extra-long length.
A fully loaded semi-trailer can be up to 19 meters for an average single trailer or up to 26 meters for a B-Double semi-trailer. When you drive out west and in the Northern Territory, you will often come across larger road trains which can be up to 53 meters long which is over 4 times the length of the average car/caravan combo.
I think that we will all agree that there needs to be far more rest areas for all vehicle types and I have lobbied for better signage on existing truck stops and general rest areas to help avoid the confusion that currently exists between frustrated truck drivers and the Caravan and RV community.
While most signage is general in nature there are many that designate Truck Rest Area and should be respected as ONLY for trucks.
Caravanners often stop for the day at midday or in the afternoon and find a rest area that seems relatively empty and assume that they have the right to camp there for the night.
The problem, however, arises when the long-distance truck drivers leave their depot in the afternoon and are due for their legally required rest stop at 1 or 3 am in the morning. They plan their trips around stopping at the rest areas they know are there specifically for them only to find them filled with campers parked all over the place leaving no place for them to park a 26-meter B-Double. They leave no room for it to safety turn in or out of the area without taking out the caravan parked at the entrance or exit.
We have all gone past rest areas and seen several caravans, RV's or cars strung out along the whole length of the rest area with space in between but leaving no long areas for trucks to pull in safely. It is just inconsiderate.
I do not understand why caravanners and RV drivers want to take up truck stops and risk a very noisy B-Double with a refrigeration motor running 24/7 pulling up beside them at 2 am in the morning.
One truck driver reported that he was woken by an angry caravanner in a truck stop at 2 am with a banging on his truck door and asking for him to turn off his refrigeration motor on his load as it was keeping the caravanner awake. As you can expect the conversation went bad pretty quickly and the caravanner threatened to call the police to have the noise stopped. The truck driver begged him to call the police as it would have been the caravanner who would have been told to leave the truck stop.
Other truck stops have been cleared by police in the early hours when there was no room left for the trucks.
Legally the truck driver must stop and if he cannot pull off the road to rest because of illegally parked caravanners and RV drivers then the police will be on the side of the truck driver every time.
Such is the arrogance and lack of respect that some caravanners have for the law and other people.
I am very pleased to say that the vast majority of caravanners want to and do the right thing. The problem is educating the minority that give other caravanners and RV drivers a bad name. We, unfortunately all get tarred with the same brush.
Please lobby your politicians and others for more signage on rest stops and roadhouses to help avoid the confusion and frustration that currently exists. There are also few roadhouses that have signed caravan park bays and they leave little options for caravanners to park anywhere else but in the long bays which may or may not be signed for trucks.
If there are no other options than to use one of the longer bays then I ask that respect is shown and where practical park at the ends of the bay so another caravan can park behind you instead of taking up two long bays.
We need far more separated rest areas but where all road users can share common facilities like toilets, tables, seats and shelters so that all can have a quiet rest and maybe share a cup of coffee, cake and chat with a truck driver who is away from family and friends working.
Respect is earned, so if caravanners, RV drivers and truck drivers want to be shown respect then we all also need to start showing some respect for others.
It won't happen overnight and we won't educate all, but we can make a big difference to the safety, enjoyment and stress of our trip by showing respect for other road users.
Below is a link to the Truck Friendly web site page on truck stops which includes a video link on using truck stops by a truck driver, Rod Hannifey. Well worth a watch.
Stay safe everyone and stay truck friendly.
Cheers
Ken Wilson
This email address is being protected from spambots. You need JavaScript enabled to view it.
Truck Friendly caravan road safety program
https://truckfriendly.com.au/truck-stops

There is no need to elaborate on Australia’s recent horrific bushfires, the intensity of which has never been recorded in this scale before. Likewise we need not dwell now on the tragic loss of life and property that has resulted.

Prompt to respond to the East Gippsland outbreaks was Gwen and Derek Hale, hosts of their Farm Stay at Sale where an open invitation was issued to any ACC member to seek refuge at their farm. Several did avail themselves of this opportunity as township evacuation notices were issued.

While grateful thanks is extended to Gwen and Derek for their hospitality, two things stand out from their ready willingness to offer refuge at their farm. First it points out that Farm Stays can respond quickly to any disaster that could arise; and second, the advantage of being an ACC member to have such a facility available. It also points out a ready trust between hosts and guests engendered by ACC membership.

Report by D. Hale and A. Bebee.

Bookings are now open by completing the on-line registration form or downloading a copy and posting to PO Box 340, Rosewood Qld 4340.

The online registration can be accessed by members signing in and clicking the link to the 2020 Chairman’s Muster Registration that will appear on the right of the front page of our website.

The cost for this muster is only $24.00 per night (per van) but this is limited, with power and watersupplied.  Unpowered sites are available at $19 per night.  The Show Grounds is a pet friendly location.

There will be a range of leisure and local opportunities within the program.  Details of activities are now available in the activity guide on the ACCwebsite.

Please register by 31st March 2020 to allow organisers to make all the necessary arrangements.  Please note that the cancellation policy and ACC pet policy will apply at the Muster.

Nearly $200,000 was injected into the economy of the Victorian township of Warrnambool and its surrounds over 7 days of an Australian Caravan Club annual National Muster earlier last month.

“In fact, some of our members are now exploring the region for a couple of weeks and this expenditure is not included in the above tally,” said ACC Chairman, Craig Humphrey. 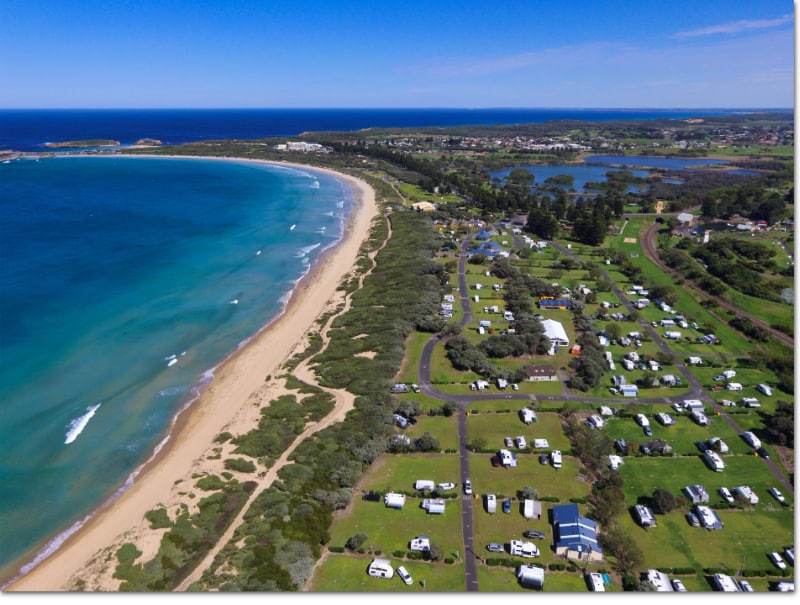 ACC Chairman Craig Humphrey noted that an interesting and fun filled programme had seen over 300 Club members travel to Warrnambool to attend the 7 day muster at the Surfside Caravan Park.

“The National Muster provided an atmosphere for Club members to chat informally with me and other board Directors about Club matters,” Mr Humphrey said. “At least five happy hours, a first timer’s happy hour, a catered dinner, and morning teas throughout the muster provided ample opportunity for this.”

“Our Club is most appreciative of the sponsorship and support that we received for the event from the local businesses in Warrnambool,” Mr Humphrey said.

Over the course of the Muster, there were a number of organised activities. “For our members who like to experience a region and its history, there were visits to the Great Ocean Road, Timboon and District, Port Fairy and Koroit as well as local trips around Warrnambool.

An afternoon of Guest Speakers informed members about local geology and fauna, gave tips on traveling with pets and told about new initiatives with the Flying Doctor and outback services.

ACC members are now turning their focus onto the Club’s 2020 Chairman’s Muster to be staged in Charters Towers Queensland from 14/05/20.

The muster was our annual AGM and Christmas celebration, 7 caravans and 13 people attended, through out the 7 days the weather varied the wind was challenging as were the over friendly flies.

A couple of days the wind subsided enough for us to have a camp fire at happy hour. Friday night was our christmas cook up dinner, a tremendous array of food, cooked via the bush camping way from all members, made for a banquet meal enjoyed by all.