A record number of registrations for the forthcoming annual Australian Caravan Club (ACC) Chairman’s Muster have been received for the Muster which is to be held in Charters Towers in May.

ACC Chairman, Craig Humphrey, said the response from members has been fantastic.

“Over 115 RV’s bringing 200 ACC members will visit the Charters Towers region for nearly a week from 14 May 2020. I had envisaged about 70 RV’s attending but I am really overwhelmed with the response.

“As a group of senior RV travellers covering the four corners of this great country, our members have seen the devastation caused by drought and other severe weather events. 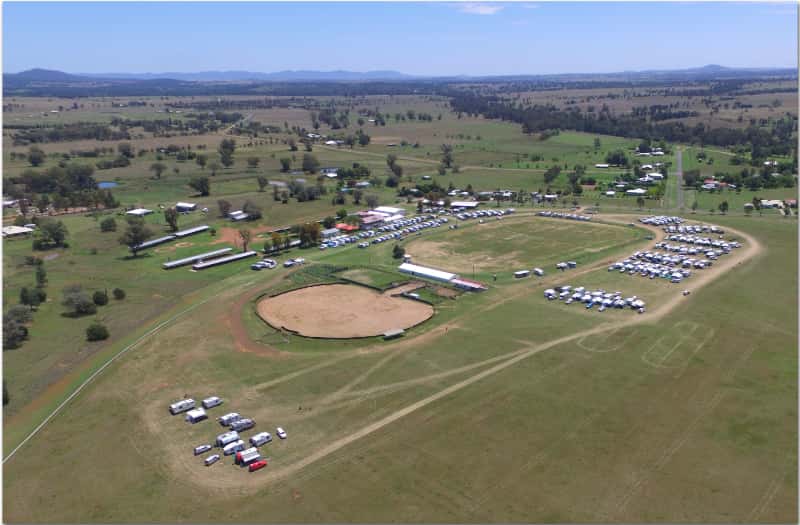 “Our members have been very strong in wanting to provide more support in drought-affected areas. When we stay in rural areas, research indicates our members spend up to $100 per day which supports local business.

“This is an example of RV travellers being able to directly support affected regions and I commend both the organisers and members for such a positive reaction to date,” said Mr Humphrey.

Charters Towers Regional Council’s Deputy Mayor, Cr Sonia Bennetto said she is thrilled by the response from the ACC community.

“We’re excited to have so many ACC members register for the Chairman’s Muster.  It will be fantastic for our community and a real boost to our local economy.

“We can’t wait to show off what our region has to offer,” said Cr Bennetto.

Whilst in Charters Towers, ACC members will visit several local attractions, have catered meals and support a local charity organisation.

Local businesses wishing to get involved in the ACC Muster, by providing an incentive or special voucher to Muster attendees, are encouraged to email the Charters Towers event convenors Linda and Judy by email on This email address is being protected from spambots. You need JavaScript enabled to view it.

“I encourage local businesses to reach out to the organisers to see how they can promote their business to the ACC members,” said Cr Bennetto.

The ACC was founded in September 2006 and is now the second largest multi-brand RV club in Australia. 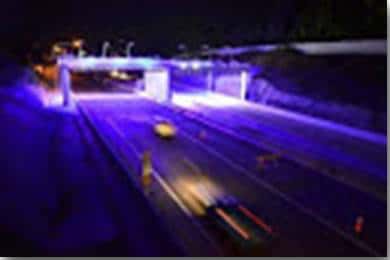 Yesterday representatives from RV Clubs of Australia Limited (RVCAL) including the ACC met with the Office of the NSW Minister for Transport on a number of matters including Toll charges for RV’s travelling through Sydney. The following advice has been received regarding a grace period that RV travellers may be eligible for a toll credit -

Are you aware that if you have travelled through Sydney using a toll way since August 2019 you MAY be eligible for a toll credit. ACC received information yesterday that improvements in roadside measurement technology has meant more consistent classifications and charging across toll roads in Sydney. As classifications are determined by vehicle measurements, towed vehicles and caravans may have been impacted by these changes.

In NSW, the class of your vehicle, along with the distance you travel, determines the tolls you pay. Class is determined by vehicle dimensions and recent improvements in roadside technology has improved the way we detected these measurements. A vehicle’s total measurements includes any towed vehicles, such as trailers, caravans and boats. If you travel with one of these vehicles, your classifications may have been impacted and you might have experienced an increase in your toll road charges as a result. A toll credit for the difference between a Class B and Class A may be available if this impacts you.

Eligibility: To be eligible for a toll credit, you must:

Linkt have advised via their website that they have proactively notified customers expected to be impacted by these changes, however some may not have received the advice. The “grace” period is until 29 February 2020, so act now, by calling them direct 13 33 31. For full details https://www.linkt.com.au/sydney/using-toll-roads/news/grace-period-for-recreational-vehicles-travelling-in-nsw

The ACC is proud to be member of RVCAL. Originally established in 2007, and formerly known as MoTOURing Australia, it aims to ensure the best legal and political representation can be achieved on behalf of its members.

The organisations that come together to form RVCAL potentially represent more than 710 ,000 recreational vehicles, that is roughly 1.3 million consumers, in a market that is increasingly growing. This figure embodies a substantial majority of our domestic RV tourist and the extended drive tourism market in Australia.

The four organisations that make up RVCAL are: 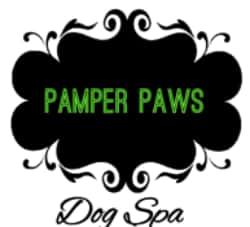 Meagan regularly attends grooming seminars to stay up to date with grooming styles, equipment and products.  She also completes at dog grooming competitions around the country. 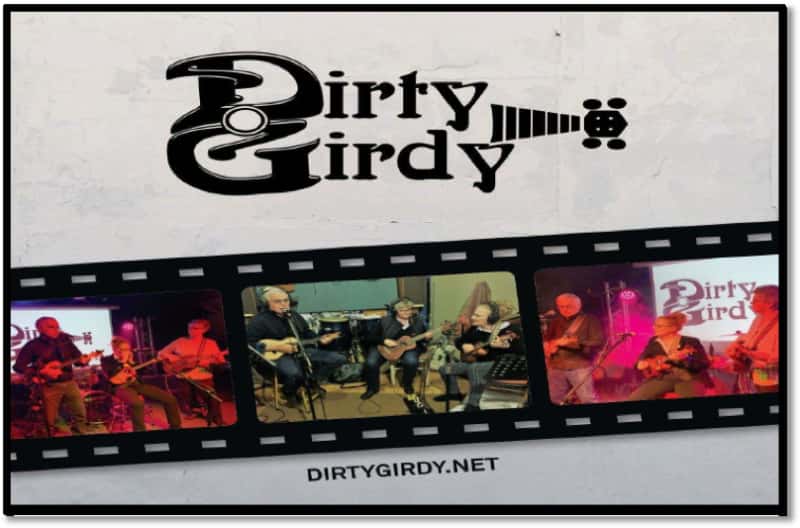 After founding and running the Warrnambool Ukulele Group for six years, the three of us, Annie, Judith and Kevin decided it was time to let others have a chance to takeover. Already we had a three-piece group playing sixties music (Guitar, Bass and Drums).  We kept playing our Ukuleles every week at home, trying out new ways of interpreting songs.  While playing around with different tunes we produced a song to celebrate Annie’s Kazoo; namely, “Dirty Girdy”.  Hence the name of the group.  From there we created more songs.

We noticed most music ignored issues from ‘third age’ people, ie those heading to retirement or past middle age.  Why not pen some songs about them?  Why not produce The Grey Album? Thus, began our task of listening to our friends discussing issues that faced them in their daily lives.  Sometimes we could use humour or make satirical comment.  For example, being grandparents inspired “Only Passing Through” and ownership of caravans gave us “Grey Nomad”.  Other times the issues required us to celebrate.  For instance, “I Still Love You” and “Still Romance”.  There were times we developed songs about life processes like “Retiring” and “Downsizing”.  At other times we couldn’t shy away from the plight of friends where songs required more pathos like “Ageing Blues” or occasionally mixed with humour like “Mobile Society”.

Knowing the Ukulele is popular with ‘third age’ people we used different styles (country blues, contemporary folk, rhythm and blues, and reggae) to demonstrate the Ukulele’s potential for a variety of rhythmic patterns.  It's been a steep learning curve; writing songs, arranging them, having them recorded, getting the CD cover designed and reproduced and learning a range of computer programs to build websites, produce videos etc.

It continues to be fun playing Ukulele and constantly learning new techniques.  Like anything practice makes perfect.  We are a long way from perfect, but we will seek to keep on improving our Ukulele playing.  Look for us on YouTube, Facebook and our website www.dirtygirdy.net . 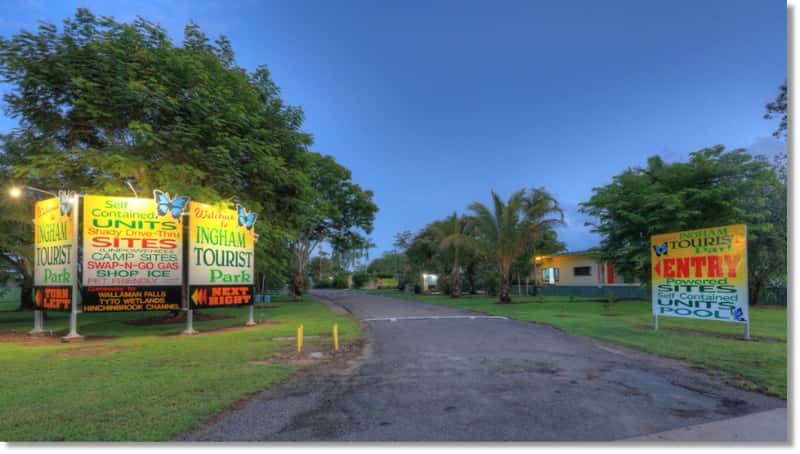 We welcome Ingham Park to our Member benefits program.

We are conveniently situated just 3kms south of fascinating Ingham with its Italian heritage and fields of sugar cane. We are the closest caravan park to Tyto Wetlands, Wallaman Falls, Mt Fox Crater and Broadwater National Park. Our location is centralised to visit historic Halifax, Hinchinbrook Island, nearby beaches, Jourama Falls, Crystal Creek and Paluma.

We have spacious drive thru shady caravan and camping sites, self-contained air-conditioned units, a shaded saltwater pool, a camp kitchen and many other features.

From Fisherman, Bird Watchers, to Sightseers we have got something for everybody.

Located on the Bruce Highway Qld.    A link of our park? https://youtu.be/Cydox8JTASQ

To those who may be travelling to the Chairman’s Muster the offer is also for travellers before and after the muster.

Our amenities are modern, spacious and maintained to a high standard. We have a separate disabled shower/toilet room. The camp kitchen is equipped with free electric BBQ's, microwave, kettle & toaster. Centrally located, the camp kitchen is a great place for social gatherings. We also have a brand new 21m Resort Pool complete with waterfall and wonderful shaded gardens - so you can take a swim, do laps or just relax by the side of the pool. The park is an oasis when you have come to Charters Towers from the outback.

Located at the North-Eastern part of Charters Towers just off the Flinders Hwy.

To those who may be travelling to the Chairman’s Muster the offer is also for travellers before and after the muster.

Please sign in and go to Members Benefits Accomodation.

Thanks to all the ACC members who have registered for the Charters Towers  Chairman's Muster to be staged from 14/5/20.

We are overwhelmed at the record numbers who will be attending. Given the need for additional planning those members attending will receive updated information in mid  February.

Thanks again and we look forward to hosting you in May.