After some retail therapy Monday morning we went on the 2.00 p.m. tour of the Willie Creek Pearl Farm.  Again we found it very interesting. 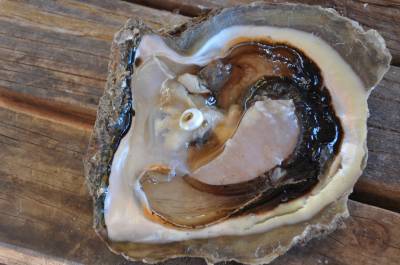 The pearl sitting in the oyster shell after it was removed.

At the conclusion of the tour they showed us the end result and allowed some to try on the jewellery.  The necklace I tried on was one of the cheaper ones, only $3,500 – probably the most expensive item of jewellery I will ever wear.  It was made up of irregular shaped pearls which is what decreased it value. 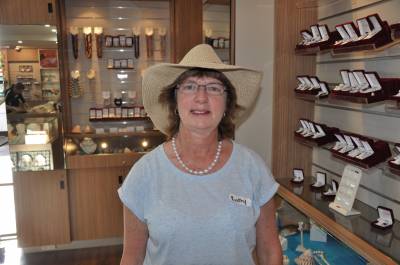 The time we spent in Broome the weather was very, very windy.  The nights and mornings were quite cool but the days were warm to hot.

We did not have much planned for Tuesday so took our time in getting organised only to get in the car to go out to discover a flat battery.  They always seem to have the knack of going flat when you least expect it.  At least we were at the caravan park and not in an isolated place.  A phone call to RACQ has the matter under control but we spent another couple of hours sitting around waiting.

Quondong Point turned out to be very nice.  We managed to get a camp stop right on the cliff overlooking the beach.  There were quite a few camps and I think most of them were ignoring the supposedly 72 hour camping limit as they looked like they had been there for some time and were not moving anywhere soon.  We saw whales which were a little way out and a bit hard to see without binoculars and one afternoon we had some dolphins playing in quite close to the beach. 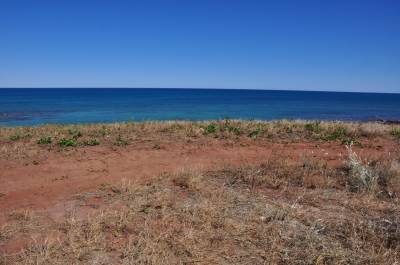 The view from our caravan door at Quondong Point 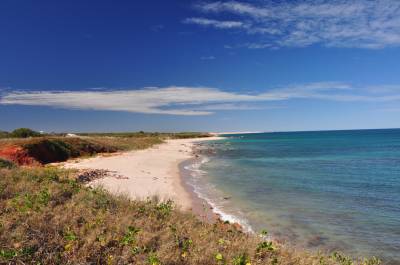 We came back to Broome or more appropriately the Broome’s Gateway Caravan Park which is about 20 kilometres east of Broome.  We came back there as we could leave our van there while we went up to Middle Lagoon and Cape Leveque for only $7 per night.  It is also much cheaper than the caravan parks in Broome but the only drawback is there are no powered sites.

It is quite ironic that the Broome Council does not provide any freedom or budget camps near Broome and resents having to allow the three overflow camps to operate in the busiest times but the information bay on the way into Broome is completely packed with backpacker cars and vans every night and obviously a blind eye is turned to them.  I would hate to call into the information bay as there are no toilet facilities there so one can only imagine the stench and mess that would be there.  Welcome to Broome!!

We had been told that Middle Lagoon was really nice but we found it to be only average.  The beaches were nice but the camp grounds were pretty ordinary and the road in was horrendous.  We had two nights at Middle Lagoon where Phil tried to catch a fish.  Well he was mildly successful – he caught two long toms of reasonable size but he considers them to be too bony to eat so it was catch and release. 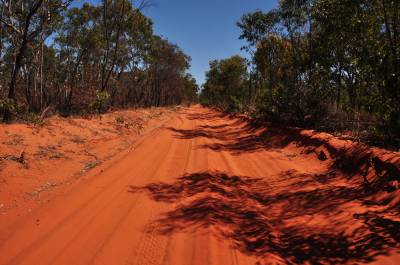 The road into Middle Lagoon - glad we weren't towing the caravan. 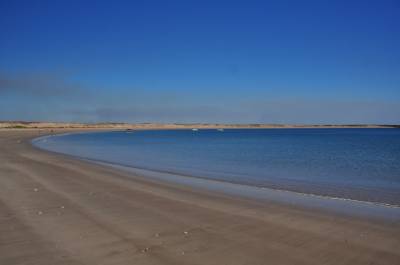 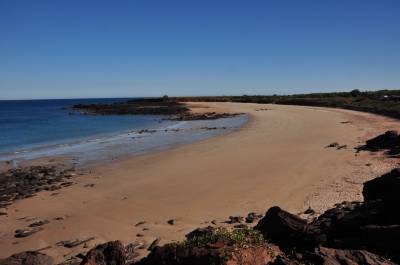 The second bay at Middle Lagoon

We stopped in at Beagle Bay on the way to Cape Leveque.  It looks a well cared for community with lawns and well maintained buildings and yards.  The Scared Heart Church is really spectacular. 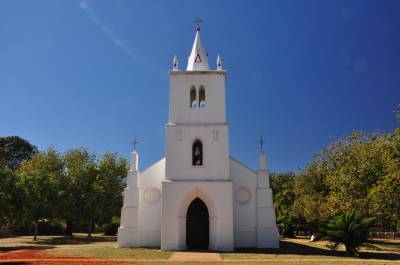 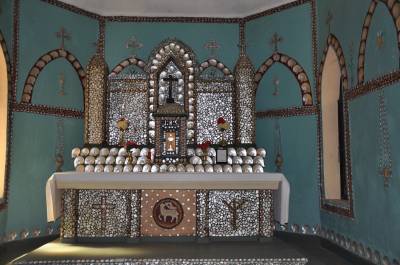 The altar is inlaid with Mother of Pearl 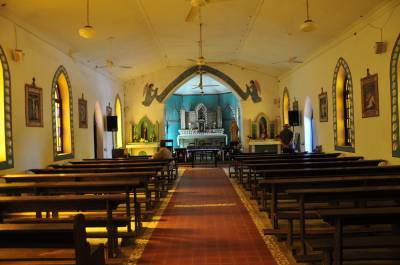 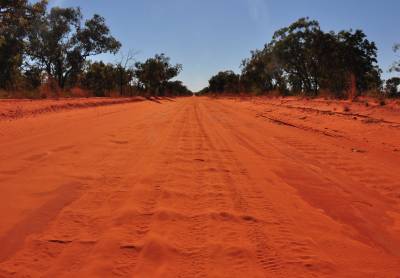 Kooljaman at Cape Leveque was one of the best spots we have been to.  It is well worth the money and the road to get there.  The people are friendly and it is one of the few places where the camp grounds looked better in real life than on the internet photos.  We had booked a beach shelter which was right on the beach and the scenery was magnificent. 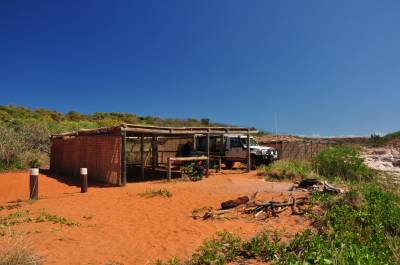 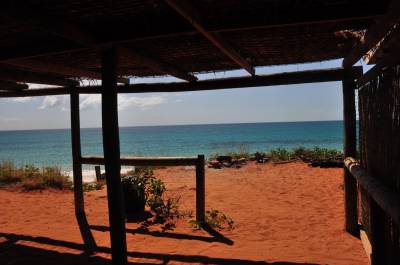 Looking out from our beach shelter 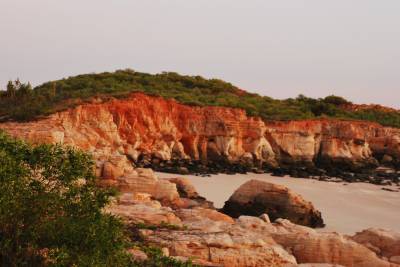 Looking north from our beach shelter

We were on the eastern side of the cape so we could watch the sun rise over water (just like on the east coast of Australia).  Just a short drive (or a walk) you were on the western side of the cape and could watch the sun set over water and sit and marvel at the beautiful red cliffs.  I think they are just as good if not better than Rainbow Beach or the coloured sands on Fraser Island.  You cannot walk around the top of the cliffs as they are a scared site but after viewing them from the bottom I doubt you could walk around the top anyway because they look very fragile. 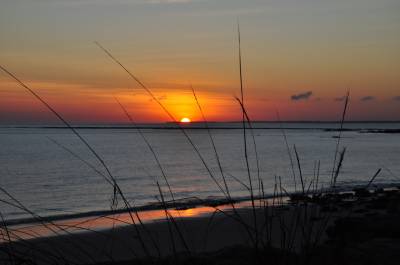 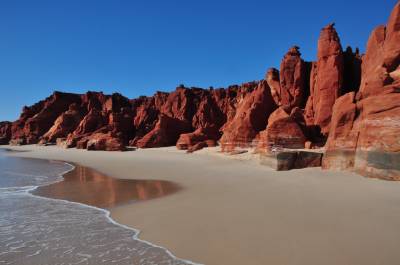 The western beach at Cape Leveque 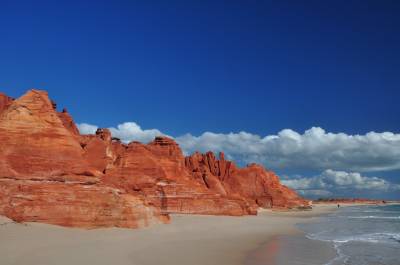 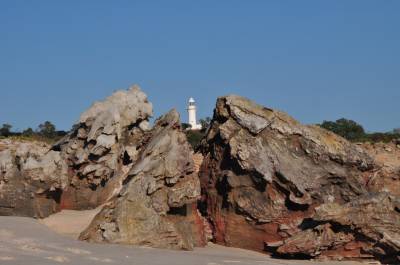 The Cape Leveque Lighthouse.  It still operates - all automatic of course but is situated in the camp grounds.

We went swimming (yes, even I went in the water) – it was beautiful.  We had two nights at Kooljaman but we could have stayed forever. 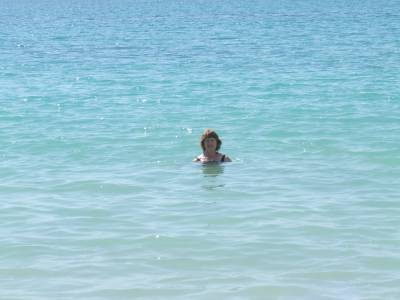 We went for a drive up to Cygnet Bay Pearl Farm and also One Arm Point.  Just north of One Arm Point is a lookout ‘Round Rock Lookout’ where you can watch the second fastest tide in the world run out (or in).  I have never seen water moving so fast. 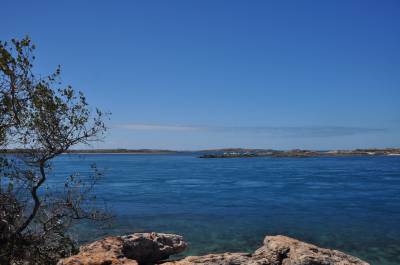 The rushing tide from Round Rock Lookout.

Unfortunately after two days we had to face the dreaded Cape Leveque Road and return to our caravan at Broome’s Gateway Caravan Park.  We needed a day to catch up on some shopping and washing.  We also had a visit to Malcolm Douglas Wildlife Park.  It is only open from 2.00pm. to 5.00p.m. each day.  They do a crocodile feeding and tour at 3.00p.m. which goes for at least an hour so it does not give you very much time to walk around and see the other crocodiles and the many birds which they have in big aviaries.  It was very interesting as they go into a lot of details about the crocodiles and they also have some fresh water crocodiles and some American alligators to demonstrate the difference between the species.  They certainly have some big crocodiles– most of which were captured because they had become a menace in populated areas around the north west. 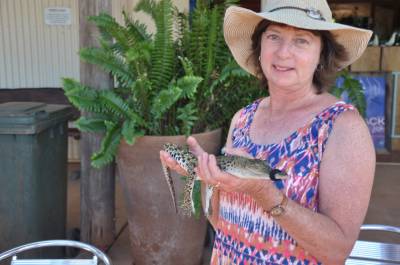 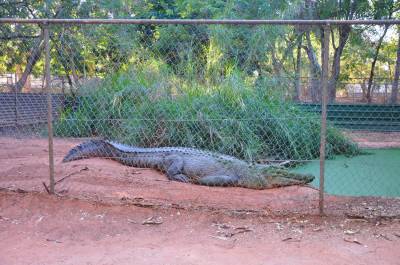 I finally got to go for my camel ride on Cable Beach. 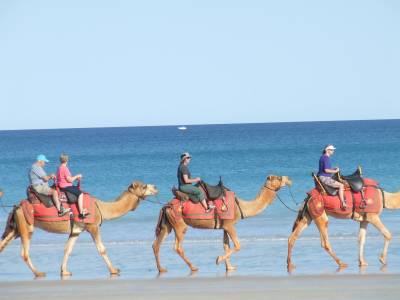 It was good although I wouldn’t call it exciting but it was something I wanted to do for sometime.  Phil couldn’t go as they have a weight restriction of 95 kilos so he was the photographer for me. We now go back to Derby and we leave on our cruise next Wednesday.