Day One at our Club's 2018 National Muster saw our muster officially opened by Terry Redman MLA who welcomed ACC members to the Denmark and Warren-Blackwood Region.  Denmark Shire President Ceinwen Gearon also gave members a warm welcome, with both Mr Redman and Ms Gearon telling members about the many 'must see' attractions in the region. 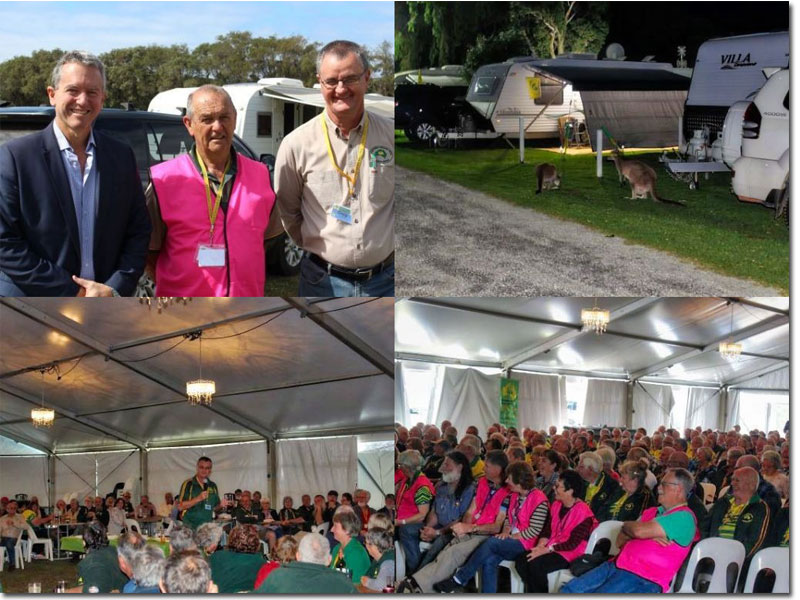 Muster organiser Brian Miller also addressed members at the opening ceremony and pointing out that his organising team are there if we have any issues, and paid tribute to the Big4 Denmark Ocean Beach owners Michael and Mandy who had been so very helpful and easy to work with to bring the event together at the park.

When formalities were complete, members enjoyed a delicious morning tea.  Many joined in a tagalong to the Tree Top Walk, Valley of the Giants, Greens Pool and Elephant Rocks, while others chose to undertake their own sightseeing in the region.

By the time everyone returned back to camp late afternoon, Happy Hours were underway with our Chairman and Board hosting the First Timers' Happy Hour for members attending a National Muster for the very first time.  Here, Chairman Craig mentioned that we had more 'First Timers' than at any other National Muster, partly due to the huge number of members from Western Australia who had supported the event.  It was wonderful to see such a large number of 'First Timers'.

The day drew to a close with kangaroos grazing in the park, and a huge attendance at the Square Dancing Evening where members could be seen having a great time dancing the night away and learning new dance routines and moves.