Court rules against Kershaw Gardens Rockhampton as an overnight stop for RV travellers.

The Australian Caravan Club (ACC) has been vocal on the issue of the flow on effects of the court ruling against the use of Kershaw Gardens as an overnight stop.

The Caravan Parks Association of Queensland has won its legal battle to ban free overnight camping at Rockhampton's Kershaw Gardens. The Environment and Planning Court today decided that camping is illegal and ruled that overnight stays must cease on February 15 next year and all signs removed.

“Interstate tourists avoiding the southern winter, traditionally travel throughout regional and rural Queensland which could be the regions most affected directly by restrictive camping issues. Many southern grey nomads may wipe Queensland off their winter destinations and will stop at the border or head to SA and up the Centre.  Qld communities will lose the economic benefits their tourism brings as they head north each winter” said ACC Chairman Craig Humphrey.

“The ACC absolutely respects the decision of the Court but our call is to ensure that RV travellers have a freedom of choice in options available to stay in Queensland destinations” said Mr Humphrey.

It is estimated that, at any one time, 120 000 of the 600 000 registered RVs in Australia are on the road. RV Travellers spend up to $100 per day (ACC survey) covering fuel, groceries and other necessities. This injects approximately $ 12 million daily into local communities.

“The Australian Caravan Club in February this year wrote to 7 Queensland Ministers expressing our concern regarding the possible ramifications of the Kershaw Gardens decision. I also met with the Queensland Assistant Tourism Minister in March to outline the ACC concerns regarding the implications of the court case and possible ways through the issue.” said Mr Humphrey

Primitive Camping Grounds are lower key than conventional camping grounds and are not required to have, for example, sealed roads, hot water or laundries.  These are often in scenic locations such as in bushland, near rivers or on the coast. The New South Wales Government has such legislation operating effectively throughout their state.

“The Australian Caravan Club calls on the Queensland Government to convene a round table of stakeholders including the relevant RV consumer organisations to work collaboratively to ensure appropriate strategies are developed for regional and rural areas continue to attract RV travellers who may now bypass these areas as a result of the Kershaw Gardens decision” said Mr Humphrey. 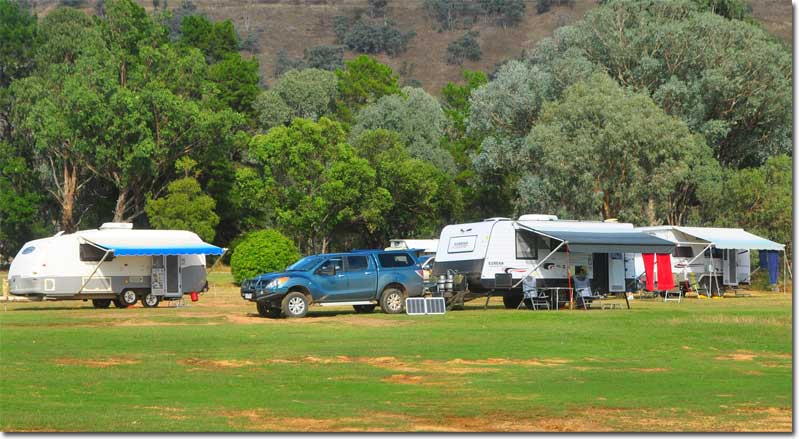 Yesterday the National Farmers Federation put out a media release about our finalised project exploring large agricultural vehicles on roads in Australia. The ACC assisted us in circulating the community survey to our club members and when completed the club requested an update on project outcomes.

As part of the project a project report was published which provides an overview of the project and the key findings. This can be located on the ACC website as as follows-  Download Franklin Project Report.

The link to the media release is here: https://www.nff.org.au/read/6104/dont-forget-share-road-slow-down.html

In particular a key point that related to caravans on page 20 in the report - most large agriculture vehicle related incidents and near misses involve cars. the researchers  posited on page 21 that the reason that caravans and trucks might be perceived as posing high risk when interacting with LAV, and more generally, is due to the fact they are memorable. Likewise the quote from a focus group participant on the same page indicates some similarities between LAV and caravans. Such that caravan drivers/towers may also experience the brunt of other drivers frustrations, similar to that of LAV operators, due to the fact there can be a small speed differential with other road users and that the road may not always allow for pulling off to let others pass.

The hunt for deadly airbags at the core of Australia’s largest safety recalls has taken a new turn, with motorists now able to check whether their car is safe through an online portal.

Led by the Federal Chamber of Automotive Industries, the Australian car industry has grouped together to create a common website where users can enter a vehicle’s registration number to see whether it is equipped with problematic airbags. People can also check vehicles owned by friends or family, as you only need number plate details to see whether a car is safe.

vehicle makers have also pooled resources to create “Don’t Die Wondering”, a provocative advertising campaign encouraging people to ensure their airbags do not pose a deadly threat to vehicle occupants.

The FCAI says 24 people have died - including a Sydney man - around the world as a result of airbags which can rupture when triggered, propelling metal shrapnel throughout a car’s cabin.

ACC urges all to support RV safety initiative in Victoria

The Caravan Trade Industry Association of Victoria and Everything Caravan & Camping have established a joint initiative to provide scheduled ‘FREE safety inspections’ for caravans and RVs along with other stakeholders and industry experts. This initiative is the result of both organisations prioritising the safety of all recreational vehicle users and the broader public.

Mr Rob Lucas, CEO, Caravan Industry Association of Victoria (CIA VIC) stated, ‘We are extremely happy to be working with Matt Sutton and the team from Everything Caravan & Camping to address a major concern of ours which is caravan and RV safety in a first for the caravan industry in Victoria. These scheduled FREE safety inspection days will be conducted to check customer’s caravans and RVs to better educate them on their caravan or RV and advise them of potential issues.’

‘We are excited to announce that our  ‘Free safety inspection’ days will be held at our upcoming shows.

To register your caravan or RV for a safety inspection go to:

https://fs29.formsite.com/trainingciaviccomau/form38/index.html
(to complete the booking form you will require the details of your caravan or RV such as model, towing weight, etc)

or for more information contact Caravan Industry Association of Victoria on (03) 9372 5388.

There is a recall on the seatbelt buckles for the rear right and rear centre seating positions may have been torqued incorrectly.

The recall notice states that the seatbelt may not operate as designed in the event of a crash, posing an increased risk of injury to passengers in the rear right or rear centre seats.

The notice  states HSV will contact all affected owners directly to notify them of required action. Affected owners should contact either HSV Customer Care by phoning 03 9265 9500, or their nearest HSV Dealer to arrange an inspection and repair of their vehicle.

To find their nearest HSV dealer consumers should go to: https://www.hsv.com.au/hsv/2017/drive/find-a-dealer/